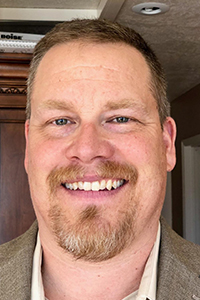 “Glenn grew up on a small farm and then an even smaller logging town in Northern California in the 70-80s. He became a Wildland Firefighter for the Lassen National Forest after getting out of the Army, where he was a paratrooper. Glenn knew that fighting fires was going to be a passion. He travelled all over the western US on a fire crew and was eventually took “Just a Summer Position” on a fire crew in the Sandia Ranger district. That “Just one season” position turned into a marriage, career, children and decades of living in and loving New Mexico. Glenn married in 1995, and is still happily married today, with the addition of two daughters, two dogs and two cats. They are long time East Mountain residents. Glenn has worked for the US Forest Service, the Bernalillo County Fire Department, and the New Mexico State Police, but eventually ended up working and staying with the Albuquerque Fire Department as a firefighter/paramedic and has retired from that department. Glenn is a proud family man and enjoys travel, camping, fishing, mountain biking, cooking and most of all whitewater rafting, with the Chama River being his absolute favorite. Glenn loves working his new second career in the exciting and challenging world of real estate.”

We use cookies on our website to give you the most relevant experience by remembering your preferences and repeat visits. By clicking “Accept All”, you consent to the use of ALL the cookies. However, you may visit "Cookie Settings" to provide a controlled consent.
Cookie SettingsAccept All
Manage consent

This website uses cookies to improve your experience while you navigate through the website. Out of these, the cookies that are categorized as necessary are stored on your browser as they are essential for the working of basic functionalities of the website. We also use third-party cookies that help us analyze and understand how you use this website. These cookies will be stored in your browser only with your consent. You also have the option to opt-out of these cookies. But opting out of some of these cookies may affect your browsing experience.
Necessary Always Enabled
Necessary cookies are absolutely essential for the website to function properly. This category only includes cookies that ensures basic functionalities and security features of the website. These cookies do not store any personal information.
Non-necessary
Any cookies that may not be particularly necessary for the website to function and is used specifically to collect user personal data via analytics, ads, other embedded contents are termed as non-necessary cookies. It is mandatory to procure user consent prior to running these cookies on your website.
SAVE & ACCEPT
Font Resize
Contrast
Accessibility by WAH
{"agentID":"155569","start":"1","per":"25"}
http://www.edgewoodnewmexicohomesforsale.com
agent.php
https://search.edgewoodnewmexicohomesforsale.com
results

To create an account, fill out the following form: